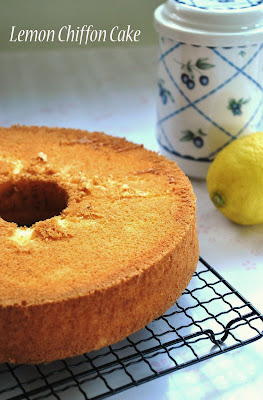 I have a love-hate relationship with chiffon cakes. I love eating chiffon cakes, having enjoyed them while growing up through the years, especially the pandan chiffon. Whenever I pass by a neighbourhood bakery, I'm always tempted by the green pandan cake that never fails to perk me up on a bad day. I love its fluffy, light texture that's slightly sweet, yet makes you feel like you haven't eaten much.

At the same time, I hate making chiffon cakes. Perhaps fear might be a better word to describe it. My mum haven't had much success with chiffons and I've witnessed the sunken centres even though they rose promisingly in the oven. I haven't dared to attempt one since, though it is, after all, my favourite everyday cake.

After reading numerous blogs and watching a couple of videos on troubleshooting chiffon cakes, I finally decided to go for it! But my fear of doing injustice to my favourite pandan cake got better of me, haha! I settled for the lemon chiffon cake instead, which looks decent and simple enough for my first try. Lemons are one of those fruits that I like very much in my desserts, their taste and smell simply invigorating.


I used the recipe from Kitchen Corner, and experimented with a change of flavours, using lemon instead of the chocolate in her recipe for a 21 cm tube pan. The sugar content was slightly reduced as well. 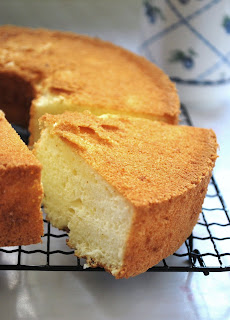 And how did my first try turn out? It was alright! No sinking, no major gaping holes. Phew, I can breathe a huge sigh of relief. The batter mixing process turned out pretty manageable as well, though the smart alec in me went to tweak the recipe, only to realise that it's a little heavy on flour after I was finished with the mixing and recalculated the proportions. The resulting cake, turned out denser than the usual chiffons I'm accustomed to, though the lemon taste was nice! The denser cake would be great for layered cakes though, as it's stable enough to hold the weight of the frosting and fillings. Well, I learnt another lesson today, which is to STICK TO THE BOOK during my first try at any recipe.

Nevertheless, it was an experiment which didn't put me off from making chiffon cakes again. My unmoulding skills are nonexistent though >.<. I hope I'll get better at this over time...