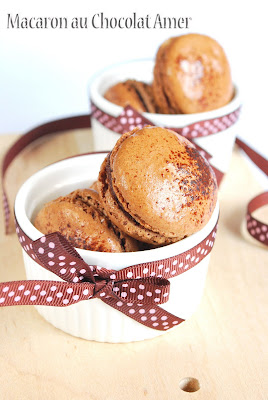 Macarons, macarons, macarons...I wonder when will my fascination with them will end. To be honest, I didn't expect to fall in love with them at all. When I first saw them at Canele Patisserie, I was drawn by the lovely spectrum of colours they came in, yet at the same time I was put off by all the colouring that went into these delicate cookies. I can still recall my very first bite into a macaron...and my impression of it wasn't great. To me, it was just an overly sweet cookie with a slight chew to it, very unlike the kind of cookies I normally love.
So when did my love for macarons start? Honestly, I can't remember. My first two tries to make macarons using the French method turned out to be total disasters. I took a one year hiatus from them until I mustered enough courage to try them again. During that one year, I read many online posts on this finicky cookie - how it's extremely sensitive to temperature and folding and humidity...almost as temperamental as a woman like me. However as I tried to understand it more, I began to fall in love with it...and know more about the intricacies of what makes it tick and what doesn't. Though I do have a couple of successful batches under my belt now, I'm still very much an amateur yearning to grow in my understanding and knowledge of this temperamental ice princess.
In my quest to understand the art and science of macarons, I decided to experiment with Pierre Herme's Macaron au Chocolat Amer recipe. Adding melted cocoa mass into the shells was an extremely scary process! My meringue turned out really flat and soft compared to my previous tries! "There it goes..." I thought to myself...and I thought the batch will never make it. I was prepared to chuck everything into the bin if it did fail me, but thankfully it didn't. My macarons had feet (though weird ones) and tasted pretty good! They aren't as pretty as the previous batches, but they do look like they're safe for consumption.
I whipped up the bittersweet ganache filling as directed, making use of unsweetened chocolate. After assembling the macarons and allowing them to rest in the refrigerator for 24 hours, I tasted them. I was pleasantly surprised at how the addition of unsweetened chocolate rounds off the sweetness nicely. My mum even commented that the shells aren't as sweet as before (which was a common grouse among my older relatives). This was really encouraging, even though they didn't turn out as pretty as I would have liked. 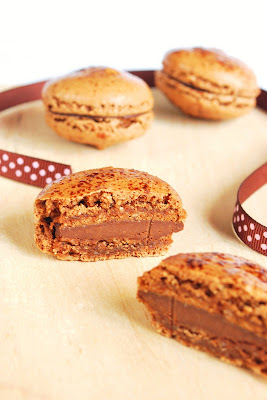 Besides unsweetened chocolate, I used Valrhona Guanaja and added butter to the bittersweet ganache. Personally, I prefer the Guanaja-based ganache to the Manjari. This has a more intense chocolate favour and balances out the sweetness of the shells very nicely.
If you'd like to experiment for yourself, the recipe is taken from here. I'd love to be able to make the perfect Macaron au Chocolat Amer like Veronica from Kitchen Musings one day...
Posted by Allie at 12:17 AM