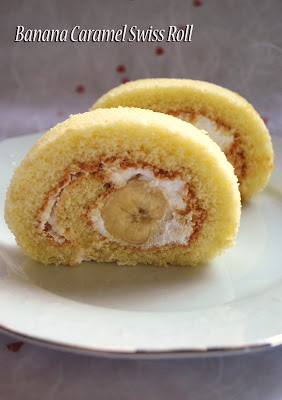 I was a little hesitant to post this up for a variety of reasons. Firstly, I made this sponge a number of times, and each time, it left me with an airy, rough sponge. Secondly, I'm tired of the multiple tries, hence the lack of energy. Thirdly, I'm not sure if I want to see this anymore. Oh well, I've decided against it and share this anyway. The result you see above is from my fifth and final try. I think this experience is enough to put me off from making swiss rolls for a good period of time. As much as I knew making swiss rolls was a tricky task, I never expected it to be this tricky.

The first time I saw the recipe in Okashi, I knew it was the recipe I had to try. I love Japanese-styled swiss rolls and the various flavour combinations that never fail to get me hooked. Plus, after trying the banana caramel tart from Fruit Paradise (which I totally adored), I had to try this combination out myself somehow!

The recipe for the sponge was simple, using just eggs, pastry flour and castor sugar. The key to achieving a soft, fluffy cake was the right mixing of these three ingredients to form a batter with a ribbon consistency, which, till now, I still can't quite grasp. Hence, my first, second, third and fourth tries yielded me an airy, rough sponge.

I liked the taste of the eggy sponge together with the whipped cream, caramel and banana. But somehow, the texture was wrong, at least to me. Made it a couple more times using the same recipe but varied the beating time for the  batter, yet the results were the same. Disappointed but at the same time determined to get a more cake-like sponge, I tweaked the recipe, added more flour and a little oil. This time round, the sponge's texture was much finer and softer than before. 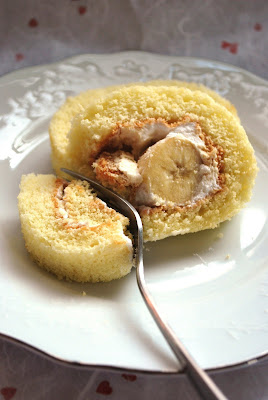 Alas, a cake-like sponge that's soft and fluffy! The rolling was a breeze and I'm glad, that there were no breaks or cracks. When I feel adventurous enough again, I shall try another flavour combination. I wonder when that day will come...

1. Whisk together the eggs and the sugar. Warm the mixture over a double boiler, whisking continuously.

2. Beat the mixture with a stand mixer until light and fluffy. This might take some time, about 10 minutes or so, depending on your mixer. Gently fold in the sifted cake flour with a rubber spatula until well incorporated, then mix in the oil.

4. Meanwhile, prepare the caramel. Heat the sugar in a saucepan until it caramelises. Carefully pour the whipping cream into the saucepan, stirring until well blended. Set aside to cool.

5. Whip the whipped cream in a stand mixer until soft peak form. Add the sugar and whip till stiff peaks.

6. To assemble, peel the cooled sponge from the parchment and place it on a sheet of clean parchment. Spread a layer of whipped cream on the browned side. Place bananas on one end of the sponge and drizzle the cool caramel over it. Roll up the sponge carefully to avoid any cracks.

7. Refrigerate for at least 4 hours before slicing to serve.